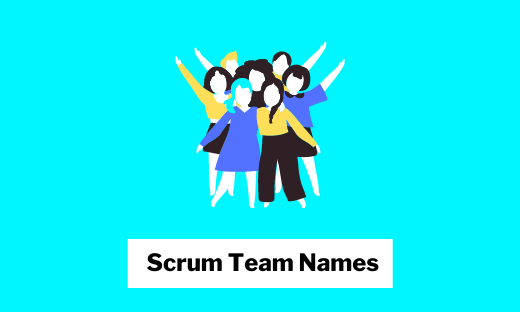 Hi, are you a part of a scrum team? Or have you decided to form one with your friends and co-workers? Don’t worry. We are here to help you to find the perfect name for your scrum team. But before you dig in the below-given list, it is important to know what scrum is actually.

Scrum is considered a framework that is used mainly by teams and organizations to solve various complicated, complex problems. Ken Schwaber and Jeff Sutherland are known as the creators of this light framework. Scrum is a methodology that is used to replace algorithmic approaches to solve unexpected and unpredictable problems. It helps to sustain products and services in a problematic situation. It is also by researchers, sales teams, and advanced technologists. The term ‘Scrum’ was first used in 1986 by professor Hirotaka Takeuchi and theorist Ikujiro Nonaka. It suggests breaking problems by scrum team members to deliver fruitful service in a limited timeframe.

The unit of scrum is a small team that includes ten or fewer people known as scrum masters, product owners, and developers. The main goal of the team is to focus on a single problem at a time. The product owners or stakeholders are responsible for delivering better business results. They are responsible for increasing the value of the service that is being provided by the team. They also negotiate priorities, scopes, and goals to finish the works within the given time limit.

The developers are responsible for performing all the duties that have been signed to them. They also support the system and service. The developers of a scrum team include researchers, data analysts, architects, and engineers. However, the scrum team is self-organizing. That is why team developers and team members are always encouraged to communicate directly with the customers and shareholders for better understanding and communication. It helps them to decrease misunderstanding and communication gaps. The scrum master is responsible for omitting any distraction that is bad for the team members. They also ensure that the team members are following the scrum theory and concepts without failing. They are responsible for promoting the scrum theories to both team members and stakeholders.

Now that you know both about scrum and scrum teams feel free to start looking for a beautiful name for your newly formed Scrum team.

How To Select The Most Suitable Scrum Team Name

A Scrum team includes ten or fewer people, depending on the situation or the need of the organization. Do not try to name your team alone. Everyone is an equal part of the team and the prime responsibility of a leader is to remember this point. That is why it is important to ask for suggestions from them. In this way, you will be able to gather more options and suggestions. It will also develop a better team spirit and make others feel important in the teamwork.

Introduce Team Qualities Through The Name

Scrum teams are known for their awesome management systems. Use the name of your team to express your team’s strengths and qualities. It will make a better image in front of others. Ask your teammates about their collective response and try to name your team something that is related to the way of your team approaches various situations.

Use Imaginations And Creative Ideas

If you want a unique name for your team, it is important to think something out of the box and be unique with the suggestions you get. Take help from your team members and use your own creativity and imagination to create a beautiful name for your team. If you want something new, do not copy others. You can get inspiration from other teams’ names. But try not to follow them blindly or choose a name out of nowhere.

Pick Something Short And Simple

Often people select complicated names for the sake of uniqueness. Try to pick something short and simple. Simplicity has its own beauty. It never fails to attract people. Others will remember the name of your team if it is short and simple.

Take your time before selecting a final name—no need to rush and no need to choose the name in a hurry. Also, feel free to ask others for suggestions. In the meantime, if you find this article helpful, share it with others. Help them discover some of these great names for their Scrum team as well.