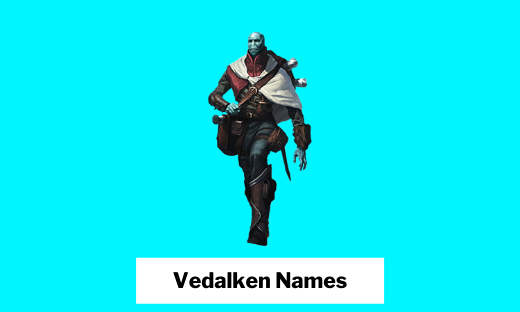 Dungeons and Dragons are probably one of the most played games across the globe. It fosters the strength of imagination and helps people enjoy the thrill of being a warrior themselves. There are many kinds of characters, but amidst them, the most intriguing one is the Vedalken. Vedalken is a blue hairless humanoid with a rather dispassionate view towards life. They are highly intelligent and seek intellect. Naming them is the hardest part of the game as we all want something unique and special to go with our name so that it truly represents the best in us.

Vedalken is tall and slim, measuring nearly a head higher than humans but weighing around the same. Their hairless skin is a variety of blue hues. Their eyes are deeper blue or violet in colour. They lack external ears, have large and flat noses, and are somewhat amphibious.

Vedalken is cultured, intelligent, and law-abiding beings. In each world, they generally participate in magical study and progress. The quest of magic in vedalken civilization takes on an almost scientific objective and approach. Because of their obsession with knowledge, they are natural Artificers and Mages. The vedalken, possibly more than any other race, engage in deception. They mould metal into magical instruments that allow them to learn about the world and improve their brains. Their magic is so linked with artifice that they would lose their identity if they didn’t have access to metal.

Astrolabes, observatories, meteorological charts, and topographical models are all furnishings to a vedalken. They are obsessive measurers and recorders of all types of information, but they prefer visual data. The vedalken are driven by a desire to comprehend everything around them, and as a result, they are in a continual, acute observing condition. This might give other animals the unsettling sensation that they are being watched and scrutinized rather than conversed with.

Most vedalken are significantly more interested in creativity and research than in politics. They would rather discover the latent possibilities of aether-based gadgets than debate how aether should be divided among Consulate people. As a result, while vedalken are found among both Consulate officials and renegades, their loyalty to either cause typically lacks the political passion exhibited in members of other races.

Now let us get into naming our favourite Vedalken characters:

You read various details on Vedalken at the start of the post, and then you looked through catalogues of name choices for your mythical character, Vedalken. It is becoming the appropriate time to dive through some pointers to assist you in choosing an appropriate name for your vedalken character. We want you to know that these suggestions are highly important for you to follow since they will eventually aid you in your decision to choose an appropriate name.

Let’s have a look at the following suggestions that will help you pick the right Vedalken names:

Choose Vedalken Names That Are Easy To Remember

You must choose names that are easy to remember. Minimalism has always been valued, and it never fails to dishearten. You can accomplish more than people would expect of you simply by selecting a catchy title. A catchy acronym has the power to capture the attention of a whole room of people. It is necessary to turn heads, but never at the expense of a silly title. Why should you pass up any opportunity to wow the audience, especially when you may accomplish so by selecting a simple name?

Because, unlike a simple name, a complicated or tricky name will never be able to wow the reader. Always choose the clearest identities available in trying to entertain all and make the name of your mythical figure exceedingly famous.

Select Names That Are Brief

It is crucial to use brief names such that users can readily grasp them. A brief name of up to three words will be able to catch the people’s attention out there. Small titles are indeed easier to pronounce or spell, and they are easier to comprehend. It is critical to select short names since they are far more attractive than long names with more than five syllables. Long names might also lose people’s attention because they are difficult to pronounce and tough to remember and comprehend.

On the other hand, a lengthy name does not seem enticing because it would be difficult for the average person to identify with it.

You must comprehend about your fantasy character as unless you do not know even some of the most key facts about your protagonist, it will be impossible for you to select a name. You would not be able to just choose a name at random from a variety of potential names. You must understand your mythical figure so that you can select names that are relevant to your character and will leave an impact. We mean that if you don’t know anything about your character, you can wind up picking unconnected names and have no connection to your character, and they won’t sound nice at all.

The finest recommendation that one could provide someone is to use digital platforms to get name ideas for literary characters as well as to seek the opinion of people on the name that you have picked for your fictitious character. Since most of us are connected to social media, we all spend the majority of our time there.

There is no greater forum than social media to listen to other people’s advice and receive both supporters and detractors. Aside from that, you’ll get a lot of name suggestions for your fictitious character, Vedalken.

Finally, we genuinely hope this post turned out to be beneficial for yourself and those looking for suitable names for fictional characters. We hope you were able to find an awesome name from the ideas we offered. We hope you enjoyed reading it as much as we enjoyed writing it for you.

So, if you like the post, please share it with your family, friends, and coworkers. We hope to see you soon with more creative names for your fictional character that is Vedalken. Thank you and goodbye.